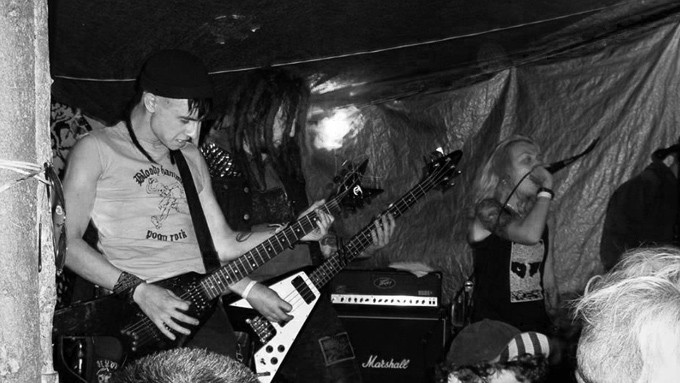 Repression Attack from Ryazan, Russia have being playing guttural Deviated Instinct styled crusty stenchcore since 2007. Their second release since their split with Pan Zlobek in 2009 was out in May of this year, entitled “Altar of Destruction”. Musically bleak and cold metallic crusty punk, which hits the nail on the head. (Interview conducted by Sean Fitzgerald)

Can you talk a little about the history of Repression Attack? A lot of references in reviews are made to stenchcore, Axegrinder, Hellshock etc. Did you start the band with the set idea of specifically playing a heavy metallic crust style of music?

Hi! Repression Attack emerged from the void in September 2007, and in December, already gave our first show in my garage, where we rehearsed then (the frost and a leaking roof were our indispensable companions at that early date). Initially, the group consisted of Nickolay, me (Gleb) and Cobra, but soon we parted with him for a number of reasons (but just for awhile, near about a year). 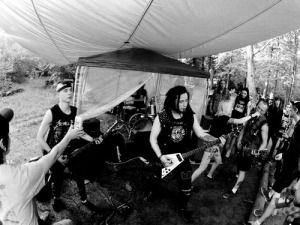 It was a fun time when every gig we had a new bass player and sometimes we didn’t even have a one. That time, our sound was basically different from the present; we focused on the D-beat and Swedish hardcore which bothered us quite quickly. In May 2009, we recorded a few songs for a split with Moscow band Pan Zlobek, which was released in a couple of months. In September 2009, when Cobra returned to the group, we began to turn our sound into a more heavy and metallic crust, since then the orientation were the early Hellbastard, Misery, Axegrinder, Effigy and Hellshock (Religion and Cold Death are from that period). In fact, we were influenced by a variety of styles, but we love the British punk-scene of 80’s very much.

The next important point in the band’s history was the year of 2011. We recruited another soldier – a second guitarist Toha Stalin. Early in the summer, our rehearsal space, which was located at the basement of the house, was flooded with the sewage (yeah, fucking stenchcore!), and we stopped to rehearse for a while. And soon Nickolay moved to St. Petersburg for six months. It was a severe shock for us, because RA lost at once the guitar and vocals. Anyway in September, we were gather again, calling for sing our friend Yulia from the Toverheks (now she is also playing on bass-guitar in Axidance), because it was the most obvious candidate, even though she lives in the other city. For three months of inactivity Stalin had totally forgotten all our songs and it has become clear that it was necessary to look for a new guitarist and we found Dimashkin (he also plays and sings in Moscow scandicore rawshit band Shitworld). As we had to start from scratch, we decided not to recall some of our old songs that we did not like. In December Nickolay returned to Ryazan, and took his usual place in the band, and since that moment the war machine is running full out. I think it is the best line-up that we could ever have! If I confused you a bit, look, today Repression Attack is:
Cobra – bass,
Yulia “Pila” – vox,
Nickolay Dolboeb – guitar, vox,
Gleb – drums,
Dimashkin – guitar.

In September of 2012 (again in September!!!) we went to the studio to record the album, which was released in June 2013. There you have it, perhaps!

Is ‘Altar of Destruction’ self released and is it hard to get distribution in and outside of Russia? What kind of response have you been getting? Where can it be bought?

Yes, that’s right, we self released the album on CD by our own without any support from the labels. As for the distribution, if you have the time, desire, and some amount of money on postage and you don’t want your discs to gather dust in the box under your bed, it is easy as pie to trade with someone. Essentially, I traded off with foreign distro / labels. The answer was either positive or no response at all. Sometimes I got a reply: “Thank you, but we aren’t interested in cd-trade because nobody buys CD’s”. I sent “Altar of Destruction” to the Czech Republic (Insane Society Records, Gasmask Records), UK (Imminent Destruction Records), Japan (MCR Company), Australia, Malaysia (Crysis Records) and the USA (Dr. Strange Records, Black Water Records). The album was released three months ago, and we just have about 150 CDs from 500 – I think, it’s not too bad.

What type of atmosphere do you try to capture with your music? Lyrically it paints a picture of a very desolate landscape, is this the way you see the world turning? Is there a political philosophy in your lyrics or is it more a mood?

I’m the author of the lyrics; sometimes Yulia helps me a little bit. The lyrics are reflecting the views of the certain things which are happening around us or with us. I can’t say that we have hugely politically charged lyrics. Anything could affect – world events, books, movies… everything that happens with us. The song Rats is about my two rats which used to wake me up during their night battles; the idea of Cold Death crept into my mind after a trip to St. Petersburg. It was the end of January and on the street was a thirty degree frost…
Album title idea – “altar of destruction” is devoted not to a war, but rather to a man and his passion of destruction, that’s why I put the man at the center of the cover. Throughout the history, people have just only shed the blood, for the sake and the name of themselves. Over the past 100 years, we do well out of this. It is the man the altar of destruction. 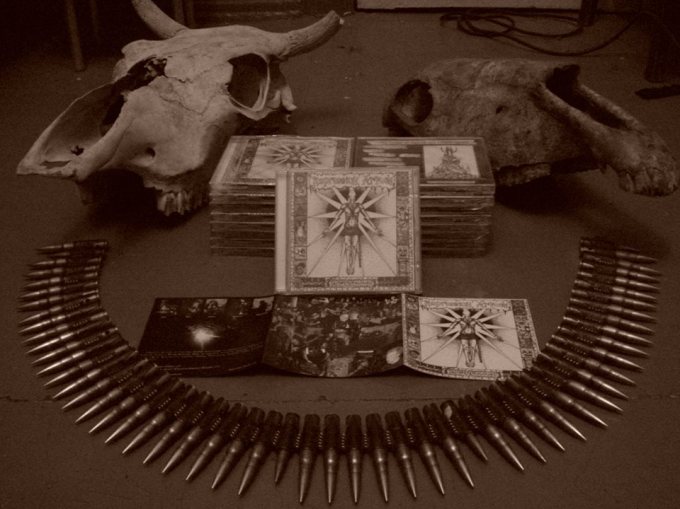 Could you tell us about the underground scene in Ryazan? Do you get to play many gigs? Are there many divisions within it? Is it hard for a band to go on tour in Russia?

I’m glad to tell if it was some =). There are few punks in Ryazan because the bands decay as quickly as they appear, leaving nothing behind. It’s rather difficult with clubs for the gigs here – either clubs conduct the kind of policy that you crucially do not want to deal with or they easy want to fuck you over . We don’t often play in Ryazan, usually on the shows which we do or our friends. There are some guys now who try to make gigs on rehearsal room, well, see what happens. In addition to our own, perhaps, only Diswarp try to fight, record and ride with concerts. As you know, Russia is very big, not every punk van could withstand such a distance and so bad roads. I know, there are Russian bands that traveled for many times through out Europe, but in Russia they played just in the 5-6 cities. Although Axidance drove over Russia, recently and reach the Lake Baikal! This is a good sign for DIY-scene)

With homosexuality against the law in Russia and the rise of neo-Nazi groups is it hard being part of a very left of field underground scene? Can there be trouble at gigs etc.

I don’t somehow think that it could be a serious obstacle. This scene has evolved in a state of siege, so everybody is used to clashes with boneheads. At proper time, they were given a decent resistance and it was sufficient to those bastards to do not even dare to poke nose into punk concerts, all the more to attack. All they can – is to troop and catch a couple of punks near the club and beat them brutally or may be cut. The main clashes taking place on the street and are more random. There are really a lot of scumbags on the streets.

Problems happen to the bands, on which concerts run a big number of the radical youth. In this case, you begin being interested in the Centre for Combating Extremism (something like a political police) who starts actively poking sticks in the wheel. These bastards from the Centre tried to ban groups in Ryazan, one of them played pop-punk, another ska. There was nothing radical in their lyrics, but they played to full house. It’s certainly much more than that … but don’t think that we live in a reality of Orwell’s 1984 or sleep with a Kalashnikov under the pillow – it’s not the true).

What is next for Repression Attack? Plans, tours, releases etc

At the end of August, we will play in St. Petersburg with our friends – Fatum, Shitworld, Bloodsuckers, check out these bands! Also, soon “Altar of Destruction” will be released on tapes by the Belarusian label Vomit rec. Early in 2014 we plan to go to the studio and record new songs, and of course we will play gigs. Let’s not make globally plans))