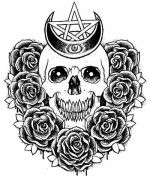 The featured artist for June 2012 is Chris Parry. Chris has been churning out amazing drawings for some time now and we, and a friend of Chris’s felt it’s high time we do a feature on him. We’re proud to showcase some of his work and tell his story. So without further adieu…

PE: How long have you been creating?

Chris Parry: I’ve been drawing since I was a kid. I started doing art for bands when I was 15. That’s about the time I was starting to attend punk and metal shows, and asking the bands if I could draw their flyers.

PE: Some of your work is tense and emotes a sense of anguish and dispair, but there are also pieces that show a lot of beauty. It’s not the typical doomy crust stuff. What influences your artwork? Which artists have influenced you the most?

CP: I like to incorporate elements of nature, mysticism, magic, depression and religion. I tend to use feminine figures in my work as well. I feel that the use of the female in art adds a sense of beauty, giver of life and the sense of a creator. My influences early on were V.C. Johnson, Pushead, Raymond Pettibon and Jim Phillips. Inspiration from skateboard graphics was huge. Nowadays, I get inspiration from a variety of friends and peers. Artists like John Baizley, Jeremy Hush, Santos, Glyn Smith and Paul Ramano just to name a few. I enjoy keeping up with their recent works. They definitely keep me on my toes.

PE: You work in several mediums, mostly traditional forms. do you have a favorite? And do you see yourself branching out into computers?

CP:I mostly work in pen and ink and watercolor. I enjoy a very hands on aspect with these mediums. I am learning how to use digital media and incorporate the use of programs like photoshop and illustrator into my work. I really enjoy doing as much as possible by hand, but incorporating the use of digital media definitely cuts down on the time it takes to finish a piece.

PE: Have you received any formal arts training or are you self taught?

CP: I attended Savannah College of Art and Design and Armstrong University in Savannah, Georgia. I went to school off and on for a few years. I was playing drums in Damad and Tank 18 at that time and chose bands over school for a while. In high school (Jacksonville, Florida), my guidance counselors pushed me to take every art class the school offered instead of other elective classes.

PE: Who have you done record covers for? Do you have favorite projects?

CP: Currently I’m working on a cover for the new Sons Of Tonatiuh (Atlanta, Ga.) lp. Others include Tank 18 (Savannah, Ga.) first 7inch, Community Chaos (Athens, Ga.) lp, Black Tusk(Savannah, Ga.) demo, Victims’ Willing(Salt Lake City, Ut).  I’ve mostly been doing poster and t-shirt art as well as magazine illustration for Oaken Throne and peacedogman.com webzine. Some of my favorites are poster work I did for Primate (Atlanta, Ga.), Wolves In The Throne Room(Olympia, Wa),  2 inner cd booklet illustrations for The Accused(Seattle) “Oh, Martha” lp and t-shirt design for Kylesa(Savannah, Ga.), Cough(Richmond,Va), and Black Shape Of Nexus(Germany). I really enjoy the projects that I’ve been working on and look forward to crossing the next one off the to-do list, which seems to keep growing.

PE: What are re you creating outside of the punk//metal milieu? What other projects are you doing and what other kinds of art are you into?

CP: I’m also a tattoo artist. I’ve been tattooing full time for the past 16 years as well as travelling to work tattoo conventions in the U.S. and Canada and the occasional guest spot at my friend’s shop in Savannah-Black Orchid Tattoo. I also play guitar and sing for my sludge band, Guzik.

PE: Is there a strong arts/ music scene in the city you live in?

CP:Yes, Athens has a huge amount of local talent working in a variety of mediums. There are a few galleries here and most of the cafes, bars and restaurants like to showcase local artist’s work. The music scene is pretty big here too and quite diverse. Seems like most of the people I know around town are musicians. It almost seems like it’s a prerequisite- in order to live in Athens, you must be able to play an instrument.

PE: Have you ever done any formal exhibitions of your artwork, as in art shows or such? Do you feel like punk spaces should be more open to this sort of show?

CP: I’ve been doing artshows for the past 10 years mainly in Athens, Atlanta and Savannah. I have also shown in Philadelphia, Seattle, and Reno and have plans of showing in Oakland later this year. I really like the idea of punk spaces hosting artshows. The first time I played at ABCNORIO, they had an artshow hanging upstairs from the band room, along with Food Not Bombs dishing up pasta for donations. I thought it was one of the best ideas-punk art and music show and food! Yeah, I would definitely like to see more of that happening.

PE: What are some projects that are in the works?

CP: Currently on the drawing table is another tshirt design for Cough(Richmond, Va.), logo work for The Oracle(Washington D.C.), Scarab(Atlanta, Ga.) as well as some logo design for some comps coming out from Australia, Denmark and Sweden.

PE: What do you do when you’re not creating or generally being all punk rock/metal?

CP: I’m not sure I understand this question. Ha! Well, I try to spend time with my wife and son and 3 cats.

PE: Anything else you would like to add? How can you be contacted?

I’d like to thank you for the interview. I’ve been an avid fan of Profane Existence for many years and enjoy that it’s still around. Cheers!