We are happy to announce our next new release 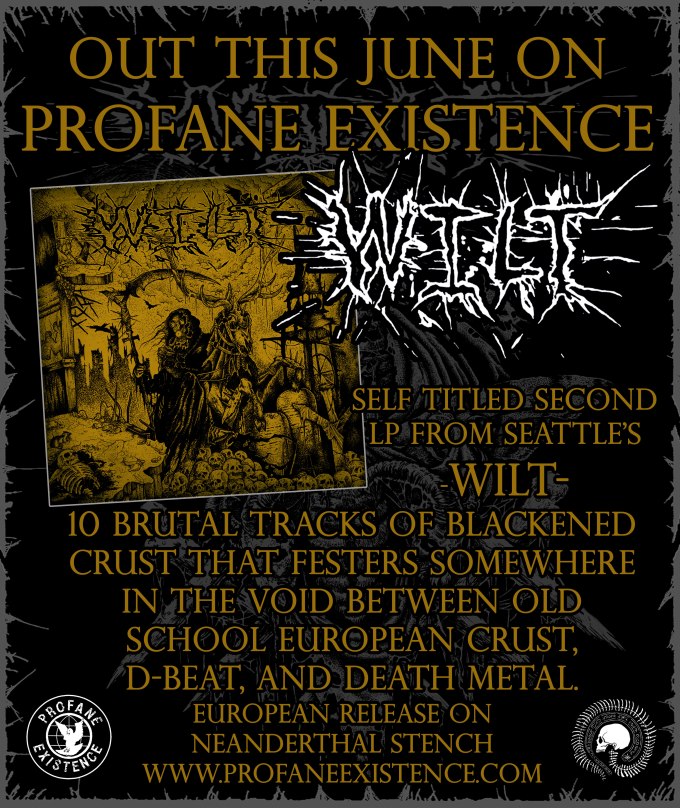 WILT combine old school metal and crust in a perfect hybrid that very few others have ever achieved. Prepare for a LP thats equal parts galloping d-beat crust reminiscent of bands like HELLSHOCK, and INSTINCT OF SURVIVAL, meets old school death metal in the vein of BOLT THROWER, MEMORIAM (old) SEPULTURA.

Here is a track from the upcoming LP

“Sermon for the Bootlickers”

Despite the inculcation of helplessness within each there remains great power. Ill at ease with such makes us ill. Learn to see the hand that feeds for what it is. You’ve been fooled if you think you’ve got no power. Refuse to be reduced to a consumer you’re a human being. Define yourself by more than wealth. Define yourself as a human. You don’t need what you’re being sold. Bend your knee to no authority but your own mind. You have the power to avoid the gilded trap. Avarice is what you’re conditioned for. Break the mold discover what’s really valuable to you. 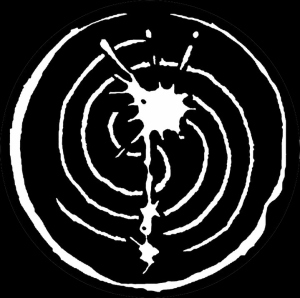 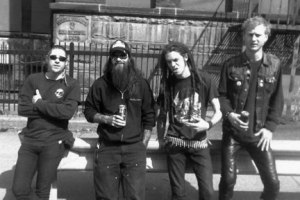 When a band get’s back together after disbanding we tend to use terms like “Back from the dead”. However in the case of Richmond’s PARASYTIC I don’t think that term fits. If you ask any member of the band they will say that PARASYTIC never broke up but suffered from a period of inactivity. Mainly due Nick’s aggressive tour schedule in his other bands, Ethan’s travels abroad, and Matt recently becoming a father. However after a long two-year hiatus the good news is that PARASYTIC is back. They have kept the reunion somewhat low-key while practicing old material and writing new songs. In the recent weeks however PARASYTIC let the proverbial cat out of the bag by announcing not just their long anticipated return but also a mini tour of the northeastern United States to coincide along with it. 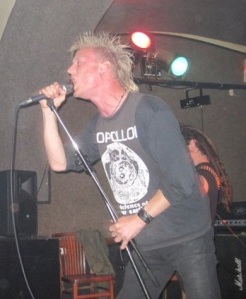 For those of you that have not heard PARASYTIC, I suggest you remedy that situation as soon as possible. PARASYTIC play an absolutely brilliant blend of metal, punk, thrash, and crust. They have been referred to as the United States answer to bands like CONCREATE SOX and THE ENGLISH DOGS. PARASYTIC’s lyrics range from animal rights, to the horrors of war, disgust at puppet politicians, human liberation and much more. With amazing riff’s, harmonizing solo’s, pounding bass, and thunderous drums, combined with Ethan’s onstage antics it is impossible to see PARASYTIC play live and not be impressed. I was fortunate enough to drive PARASYTIC on their first tour in February of 2008. We spent a few weeks on the road starting in Richmond VA and working our down the east/gulf coast all the way to Mexico City and back up the Midwest. Every night was a blast and it never got old seeing these guys play. Spending time getting to know them was even better. PARASYTIC toured extensively in the following few years playing shows all over the United States and spending a month playing the European squat circuit in 2011. 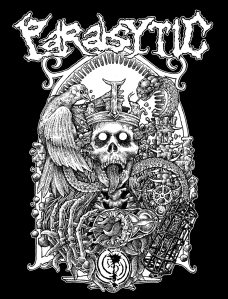 Tonight PARASYTIC take the stage at Strange Matter in their hometown of Richmond VA for the first time in over two years. They will be joined by VISIONS OF WAR (Belgium) NO/TOMORROW (RVA/SC) SEX DWARF (Sweden) and WRATHCOBRA (Pittsburgh). On Thursday they head to New London Connecticut to begin a short mini tour. In my opinion PARASYTIC is one of the most important bands to ever come out of the United States. I for one am completely thrilled to see them active once more. It’s rare these days to see a band that is political and sincere as well as extremely talented and energetic. If you have a chance to see them at any of their upcoming shows you wont be disappointed.  LONG LIVE PARASYTIC!!! 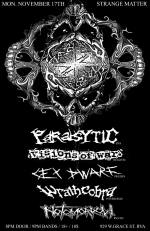 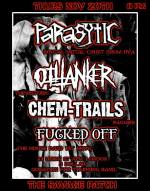 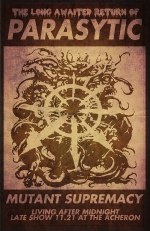 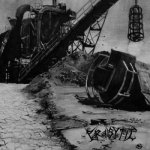 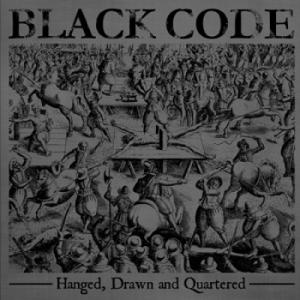 HANGED, DRAWN AND QUARTERED is one of the newer albums in the PROFANE EXISTENCE store (3 vinyl copies available at time of review), received via trade from a French label RAVACHOL PRODUCTIONS / SVOBODA RECORDS.  This outfit from France formed in 2011 and currently reside in Besancon, a city in eastern France about 30 or so miles from the Switzerland border. The lyrics comment on corrupt politicians, false satanists, drinking beer, puking beer out of your ass, refusal of working so you can get drunk all day, and then again more satanism.  The band seem like a bunch of mean rowdy drunks that get off on being “more evil than thou”. Vocals hit the mid and deep range, and musically, this is all out crusty thrash metal with dual guitars and a very competent drummer.  HDQ is their first full length effort, and they’ve already got a split 7″ out with LUST FOR DEATH, a new band, also from France.  Check out the split if you like BLACK CODE, it’s in the same style but with a more recognizable crust punk based beat, and the EP is 14 + minutes long!  all material can be accessed through the bandcamp page.

Buy HANGED, DRAWN AND QUARTERED directly from the Profane Existence store! quote from PE: “BLACK CODE are a dark and heavy hardcore band from France. For fans of bands like BLACK BREATH, TRAGEDY, and MASSAKARI. They feature members of HUMAN COMPOST.”

15 blasts of hardcore thrash are on this seemingly self-released tape from New Jersey band S’o’ftdov.  This music has been self – described as cyberdelic disnöize / surreal death crust played at d-beat tempo, and the vocals are layered with reverb.  The work on the package is superb, including printed lyrics for all songs and a profesionally done band photo.  This tape came with a felt backpatch of the cover art, black on grey.  Well done!

A sample of what’s to come on the PE single release of the War//Plague e.p. “Primal” 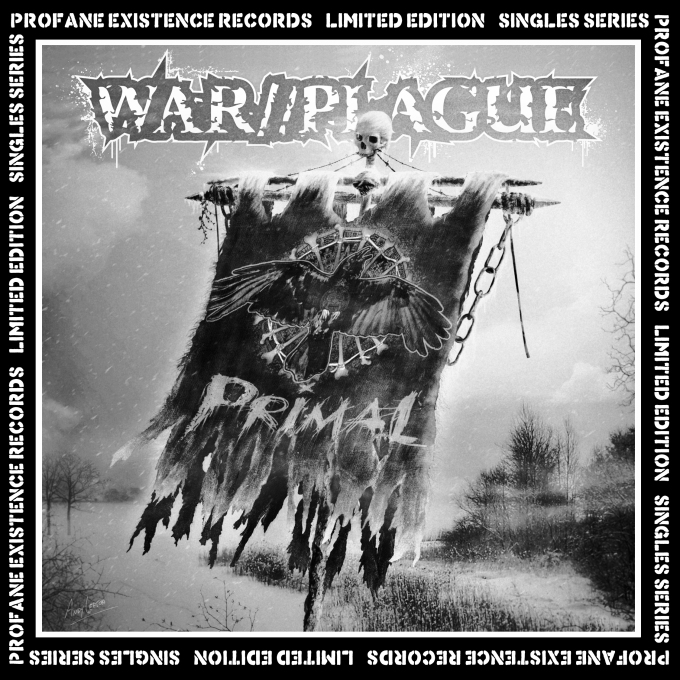 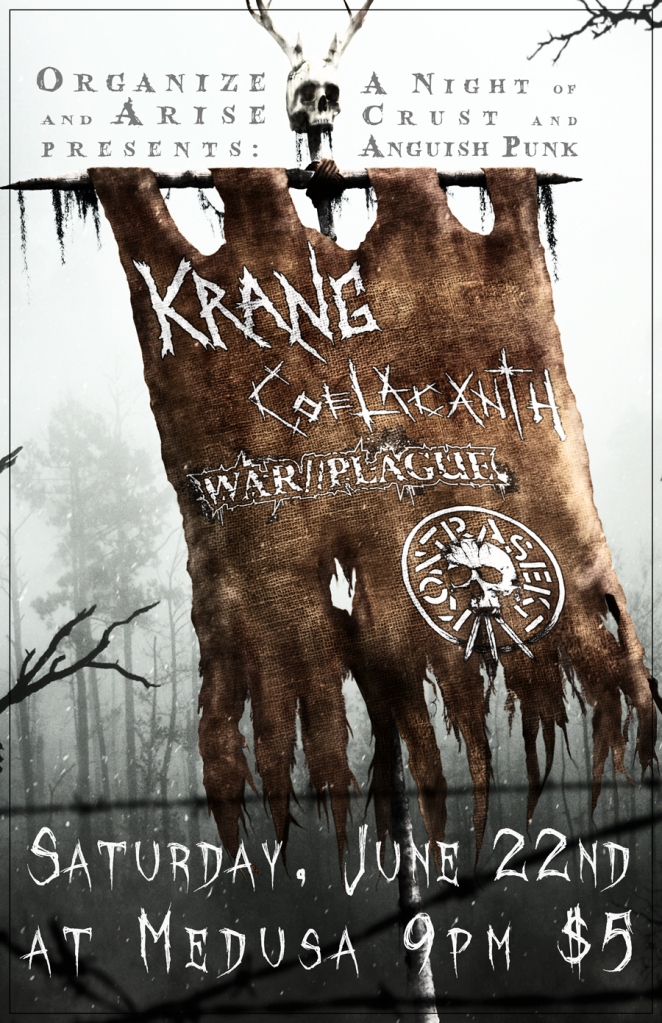 Man, where were these guys when I was in high school? In the mid 80s I dedicated every spare moment to skateboarding. We’d go down my buddy Chris’s mini ramp and skate our asses off listening to BLACK FLAG, DEAD KENNEDYS, CIRCLE JERKS, etc. Then I discovered thrash and shit got real! My first show was ANTHRAX, EXODUS and CELTIC FROST and everything changed. Once you get a taste of punk/thrash crossover, you can’t go back. IN DEFENCE from Minneapolis is the link to my shred-tastic youth. I now this may upset the folks in the band, but some of the writing reminds me a lot of M.O.D. Sorry, dudes, but it’s true. Not in a bad way, though. Fortunately the subject matter is way more funny than it is offensive and while they love to have a laugh, they do flirt with serious politics. Each song kills it riff after riff with solos that fill the song out without being wanky and they are usually accompanied by beautifully moshy breakdowns that I realized I was unknowingly banging my head to each and every time. There’s no way to listen to this without getting stoked. It contains the second LP and 2 7″s(in case you didn’t get that from the line I wrote above the picture). Unlike some 22 track albums that seem to drag on, you’ll want to put this on repeat, flip up the bill on your hat and circle pit around your room for hours.  When these thrashers come through your town make sure you buy them lots of pizza….er, um, burritos. Lots of burritos. (Jake) 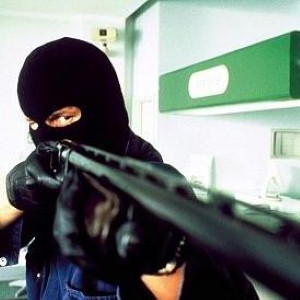 For the last year we have been pressured by outside forces to keep the “retail” prices high for Profane Existence releases. We’ve never been able to get used to seeing our records priced at nearly double of what we traditionally sold them for. Profane Existence has always vehemently independent and our recent experiment with an exclusive distributor has pushed us outside of our comfort zone. Effective immediately, we are lowering our mail order prices across the board, back to where they were in 2011 (in fact less than 2011 in most cases). In the USA, most 7″s will now cost $5, CDs will be $6.66 and LPs will be $7.98 – all prices including postage. We do still have some older Profane Existence magazines left and they are also appropriately DIY priced.

We do still plan to keep the limited edition singles series going, but due to the economy of scale (or lack thereof), these records will still be significantly higher than mass-produced PE EPs. We will release a low-priced CD version, containing six complete EPs each, shortly after the release of 6th, 12, 18th, etc. PE also has quite a line-up good new releases planed for 2013, plus some some classic PE releases coming back with low-priced vinyl and CD versions.

We apologize for the lack of DIY spirit PE has displayed for the last year or so. We’ve all been busy with other aspects of our lives and regret that we let things slip out of whack for so long. Rest assured we are taking corrective steps to get PE back on track and to help keep DIY punk a force to be reckoned with!

So we just wrapped up our tracking last week and now have Brad at Audiosiege in Portland doing the mix and I’ve gotta say…this is by far the best experience and sound we’ve ever had! We’re planning to do two separate albums with this session. Our first priority in releasing these tracks is to get our single out for the PE series that’s running this year. I believe we’re in line to be #7 and already have the art and title sorted out….but sorry, you gotta wait 😉

The next release is based on a mere concept we had some time back and will be a 4 song 12″ with a sort of back story. We’ve been really hitting the ground running as a band and feel that we not only want to write music, but we really want to put our minds and energy into something that’s not just “another record”. I’m not quite sure what that means, but after doing this for so many years, you really start to recognize how important the music can be and what kind of effect it has on yourself and others. 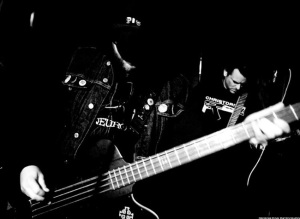 So, to say that we’ve just begun would be putting it lightly. Tons of ideas, and tons of support from all over. Cheers to the DIY community and everyone involved to make this place better by contributing in one way or another. Punk is a way to get a message and a feeling out to the world, and damn it feels good! Cheers

Some really good thrash mixed with punk and metal on these eight songs from KILL THE CAR on their second full length album. Super short songs with only one going over the two-minute mark mean that KILL THE CAR will not over stay their welcome, but get right down to business. These guys have been at it since 2005 and have the intense mix of genres down to a science now. They have screamed vocals, wild guitar and drumming and the bass is banging away furiously while you try to keep up with what they are doing on this album. The lyrics are really interesting being socially aware and well written. This is a cool, but short album that should get you up and out of bed in the morning with energy to spare, these guys sure do have it in spades. (Rick Ecker)