We now have copies of this masterpiece in hand and ready for distribution! 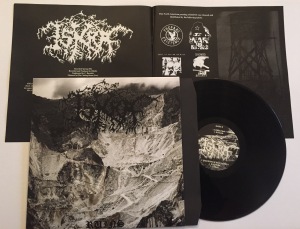 Formed in 2002, ISKRA set out with one goal – To revolutionize the metal underground. When I asked founding member Wolf as to why punks / activist’s would spend so much time and energy working in a  metal scene that seems worlds away from anarchist principles, his response was simple, “Because it needs it.” Since the early 2000’s ISKRA have toured the United States, Canada, and Europe. Brilliantly combining crushing metal with well thought out and highly political lyrics, it is no surprise that they have become somewhat legendary in both the punk and metal underground.

“Ruins” is ISKRA’s third studio album and by far their best one yet. Recorded February 2014, Ruins was engineered and produced in true DIY fashion by ISKRA’s own drummer Cody Baresich. The album was then mastered for vinyl at Sweden’s CUTTING ROOM by Martin Ankelius. 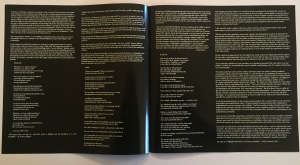 “Ruins” contains 10 punishing songs with lyrics ranging from anarchist theory, military drone strikes on civilian populations, historic native american battles against european colonialism, and a yearning to be free from draconian laws. Combined with over the top riffs, devastating blast beats, pulverizing toms, and the occasional dive bomb this LP will leave your speakers smoldering. Not only is this one of the most intense records PROFANE EXISTENCE has ever done, it is also one of the most beautiful presentations we have seen in recent years. The stark mountainous cover resembles Middle Earth artwork but the real gem is the 11in x 11in 12 page booklet inside.

Printed on glossy paper, this booklet contains not just lyrics but very thorough explanations of each song. This vinyl release is financed by a number of DIY labels from around the united states and Canada. Including, PROFANE EXISTENCE RECORDS (USA), BLACK RAVEN RECORDS (CAN), DOOMED SOCIETY RECORDS (CAN), WAR ON MUSIC (CAN), WHAT IS MAKING US SICK (CAN), NOCTURNAL RIEGN (USA), and ECHOES FROM BENEATH (CAN).

Other records still hot from the press…

“We Don’t Need Them” is the second full-length record from West Virginia punks Appalachian Terror Unit. ATU have become known throughout the years as being one of the most politically charged bands in the current punk scene. This new record is an all out attack on today’s society that takes ATU to a new level of intensity both lyrically and musically. The combination of the beautiful and thought provoking gatefold cover (with art designed by Stiv of War) along with the brilliant recording and mastering job by Jay Matheson at the Jam Room take this record even further.

Song subjects include the horrors of war, police brutality, destruction of the environment, rape culture, consumerism and much more. Expect a very heavy and much angrier approach from a band that has been around the block and matured their sound. Seven raging new tunes including the epic fourteen and a half minute track“We Don’t Need Them”, a song that will one day be ranked among similar greats as the SUBHUMANS “From the Cradle to the Grave” and AUS ROTTEN “And Now Back to Our Programming”.

This is a split release between PROFANE EXISTENCE, RUIN NATION, SKULD RECORDS, and APPALACHIAN TERROR UNIT.

Back with some serious raging crust and hardcore punk. Both WAR//PLAGUE and VASTATION have teamed up to delivery a fierce and socio/politically charged record that will fulfill your craving. Bringing both the Minneapolis and Portland DIY communities together!

This is WAR//PLAGUEs 7th release that has 2 songs with a cover track that pays homage to TOTALITARs “Sin Egen MotstÂndare”. Signed, sealed and approved by TOTALITAR themselves! This current release for the band is a prelude to their upcoming LP and 8th release.

VASTATION once again are out for blood! This band has proven time and time again that they are at the forefront of
the stench/crust movement with influences stemming from Sacrilege and Bolt Thrower! These guys have put Portland back on the map again with music that brings brutal rage and a thought provoking element to the DIY scene.