Over the last several years I’ve talked with punks who would work on organic farms through the summer, and I listened to their tales of farm life. I’ve since met people who have gone further with that desire to leave the cities and all the trappings of the modern world. Some have gone to work on farms, some just left the city for smaller communities, and there are those who made the leap and are truly living off the grid.

Over the next several weeks we will feature some of their stories. Here it Gretchen’s.

What’s so punk about living in the bush? Sitting around twiddling your thumbs in isolation. The city is where the fun is. It’s where the action is. There’s shows, bike rides, dumpsters, Food Not Bombs, people to bum change off of, people who share your ideologies about Anarchism, Feminism or Equality, plus there’s lots and lots of punks.

On the other side, there’s also cops, yuppies, pollution, gentrification, drug problems, cops, pavement, landlords, garbage, and way too many cops. And if these things start to get you down, you can just drink your worries away. And if shit gets hairy you can always take to the rails, blast through some nice scenery and go hang out in another city for a while.

That’s what I did. It’s all I knew. Where I grew up, Nashville, I just saw the country as full of deliverance-style rednecks and meth labs. Why would I ever go there? And when I escaped that place I just travelled from city to city. Sometimes I would settle down for a bit, but soon enough I would get itchy feet and have to take off again. Rural living for me was living on a train for 3 days as I went from Minneapolis to Seattle.

My first experience living outside of a city was spending four months on Denman Island, one of the Gulf Islands in British Columbia. I lived in a trailer outside of a hay barn in the middle of a sheep field. My rent was to feed the sheep and the horses everyday. It was a lot of fun. It totally changed my mind about country living. I loved it, but wasn’t quite ready to give up city life just yet. There were still towns to explore, bands to join, shows to go to and punk houses to destroy. So I left and went back to the travelling, city-dwelling life.

A few years down the road I found myself in Montreal, living in an old warehouse turned into shitty lofts and crawling with punks. It was winter and I was in a huge slump of depression, drinking shitty 40’s everyday, mostly by myself, so that I wouldn’t care about anything. I saw how fucked up the world is, how cruel we are to each other and how stupid we are for trashing the earth to a point where we’re making it inhospitable for ourselves. And I realized that after all my activism, all the protests I went to, being vegan (and then being a conscientious “post-vegan”), and all my well-wishing ultimately did fuck all. TOXIC NARCOTIC’s lyrics pretty much paralleled my mood. “We’re all doomed, what’s the use? Fuck the world and pass the booze.” I saw myself falling hard and I knew something drastic had to happen in my life.

I got a job tree-planting in BC in the spring but I left Montreal a month early so I could spend some time with my partner who was living in Winnipeg. While I was there I went to a PROPAGANDHI show and bumped into some old friends who said they were living on their father’s land an hour outside Winnipeg and invited me out for a visit. Always up for an adventure, I left with them the next day.

Being out there for that week changed my life. They lived off-grid in a glorified shack. They heated their house with wood, which they had to cut themselves. They also cooked their food with a wood cookstove, something I had only ever seen in museums. An artifact of a bygone era.

I kept myself busy helping them do the spring cleaning and hauling in wood from the bush. They kept horses, and while I was there we got completely snowed in, so we took the day off to take a five hour sleigh ride to the beer vendor and back. Epic fun.

But, after a week I left, and when I got back to the city I felt gross and out of touch with reality. It was a shock. It was -10°C (about 15°F) but it was so warm inside. No stove to stoke, no wood to stack. Just turn a dial and pay a bill. To this day that still shocks and disgusts me. For me, heating your house and cooking your food with wood that you cut, hauled, stacked, and seasoned by yourself is by far my favorite aspect about living in the bush.

Fast forward to now. I’ve been living outside of cities for the better part of two years. I’ve lived in a few different places and have learned a multitude of different skills. Where I live now is in a community of homesteaders on 80 acres of isolated bush in Manitoba, close to the Ontario border.

I found the transition to bush life very natural. I don’t find it too hard to stay connected with my friends. I’m only an hour and a half from Winnipeg, which surprisingly has a pretty wicked punk scene. I still come into town every few weeks to catch a show or visit some friends, but I’m quite content to live out here in the bush.

I have serious anxiety issues and I find that being out here is so calming and chill, which is so good for my mental health. I also barely ever have to work because I barely ever spend money. I grow a very large amount of my own food, so I hardly ever buy groceries.

I live off-grid in a small house. I have a very humble 12-volt solar power system – just enough to power a few lights and an old car stereo I hooked up. You would think that living without all the conveniences of civilized life would be hard but I actually find it quite liberating. Everything I do, I do myself. 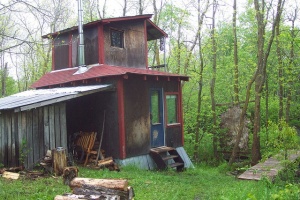 I used to be a bike mechanic and a welder, but I’ve found those skills pretty much useless out here. The closest bike shop is probably in Winnipeg. Tragically, biking just doesn’t make sense out here unless you love touring. It’s something I’ve had to come to terms with. Bikes were my passion when I lived in the city. Now I’ve slowly started replacing my old skills with auto mechanics, blacksmithing, bow-making, tanning hides, wildcrafting and gardening.

Honestly, the thing that’s probably the hardest for me is the lack of punks around. Punk culture is something I hold very close to my heart. My Irish, Welsh, Ukrainan, and Dutch heritage is just a random grab bag to me, places on a map I’ll probably never visit. I’m nothing more than a mundane White settler. But to me, settler culture is everything I despise: Wal-Marts, video games and exploitation. Extreme waste.

I also have no real home. Born in Alberta, raised in Tennessee, I feel no alliance to those places and I have no desire to return. I also haven’t lived in a place for more than a year since I was 17. No culture, no hometown. All I have is punk. Punk culture isn’t something I was born into, it’s a path I chose. So I hold onto that, very tightly and defensively.

Interacting with locals is sometimes amusing. There’s a Hutterite colony very close by (Hutterites are similar to the Amish except they allow electricity and tractors) and a large Mennonite Christian community in the area. A lot of them don’t get out much, so when they see a girl walking around town wearing skimpy, crustie clothing and covered literally head to toe with tattoos, some of them get their minds blown. However, a lot of people don’t give a shit, and try to make me feel welcome in the greater community. I’ve made some genuine friendships with folks who I would never have talked to in the city because they weren’t in my anarchist/punk bubble.

Since moving out of the city, I’ve become less of a drunk and much more creative. I’ve started drawing, bow-making, archery, tanning animal hides, and I’ve picked up the banjo. Lately I’ve been making jewelry with bones, claws, antlers and sinew.

For years, even before I moved out to the bush, a lot of my friends have always talked about leaving the city, and how they’ll move out to the woods someday. Very, very few of them ever take steps in that direction, and I’ve grown tired and annoyed with their lack of action. They see all the problems and the inherent unsustainability of urbanized areas, realize they should do something, but never act on it.

It’s obvious to me now that cities are festering cesspools of greed, consumption and garbage. Urbanized areas and industrialization (which go hand in hand) destroy so much more than the ecosystems that once existed in the surrounding area. Forests are stripped away and prairies tilled to create food to feed them, completely destroying the ecosystems that once existed there as well.

Where I live, in a transition zone between where the rocky Canadian shield ends and the flat prairie lands begin, there used to be some of the largest trees in Canada east of the Rockies. I’ve read accounts of old timers describing trees more than four feet in diameter commonly found in this area. 150 years later, all of those big trees are now gone – used to help build the Canadian Pacific Railway in the 19th century – replaced with fields of wheat, flax, canola and soy.

I live on the edge of this farmland. Where I live and east of here is too wet to be farmed, so it was logged and then left alone. It was able to grow back into the beautiful and humble forest it is now.

I wish punks who talk about leaving the cities behind will take the step of connecting with the land and not be afraid of looking like a bunch of hippies. Living in the country is fucking epic. It’s a big step but what you get is amazing.

If that’s what you want to do, take action and do it.

or by tech-no mail: