A Brief History of May Day
On May 4th, 1886, after a workers’ demonstration for the 8-hour work-day was brutally repressed four days earlier, a large crowd assembled at Haymarket Square in Chicago. When the police arrived to suppress the crowd, a bomb was thrown in their direction, a viscious riot ensued, and ultimately 8 police were killed by gunshot.

Eight anarchists involved in the struggle for the 8-hour day were soon the victims of a government witch hunt. Though the prosecutor and judge admitted none of the men had thrown the bomb, and that most were not even present at the demonstration, the court put the men’s ideas on trial, and found them guilty. Four of the men were hung; one killed himself in jail to deny the State the pleasure of murdering him at the gallows. 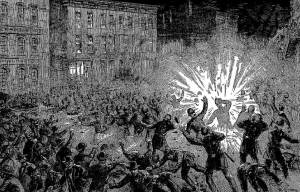 The international radical holiday of May Day grew from this history. The US government has repeatedly tried to eliminate this celebration, at various times offering “patriotic” alternatives to the anarchist holiday under the auspices of “Americanism Day” or “Loyalty Day.” Labor Day is part of this history of liberal recuperation as well, seeking to divorce organized labor from its anti-capitalist and anti-authoritarian roots.

Nevertheless, May Day continues to be celebrated around the world, known as a day of both festivity as well as attack – one-day wildcat strikes, attacks on police, and riots are common throughout the world on May 1st. This year, thousands will participate in autonomously organized general strikes in several American cities, similar to the one which occurred in Oakland last November. Much like the original 8-hour struggle in Chicago, this organizing has superseded the political party affiliations and legally constrained methods of institutionalized labor.

Who are these Anarchists?
Anarchism is less a singular political identity than an ongoing practice, based in permanent opposition to hierarchical social relationships rooted in coercion, domination, and exploitation. Much of the world’s early labor movements were anarchist in nature, emphasizing direct economic action and social revolution as opposed to electoral reformism. These movements understood the nature of the State to be inherently and inextricably tied to class society; taking over the State in the name of “the people” or “the workers” was and is seen as a farce. History has shown that equality cannot be coerced from the top-down, and States do not just “wither away.”

Since the early days of Haymarket, anarchists have integrated an increasingly wider body of theory and practice into their organizing, including an array of critical thinking around race, gender, and ecology. In the past year, anarchists have been instrumental in the emersion and growth of Occupy groups around the US, Oakland’s general strike on November 2nd, university and building occupations around the country, support for prison rebellions, and the West Coast port blockades in solidarity with longshore workers. We continue to try to open up spaces in which new, horizontal practices of revolt and social organization can emerge.

Burying the Corpse of Liberalism
These “new” forms of revolt and social organization, present everywhere from the neighborhood councils and attacks on political party buildings of the Egyptian uprising to the general assemblies and affinity groups of Occupy, stand in stark contrast to the decaying model of traditional liberalism practiced by bureaucratic unions and political parties. In the face of economic recession and widespread austerity measures, often imposed by the same politicians such groups bring into power, it has become clear that the traditional Left is at a dead end. Making policy demands, political constituency-building, and negotiating with those in power can not and will not allow us to escape the misery of 21st century capitalism. Instead, we seek to encourage and popularize forms of rebellion and organization that dispense with these worn out models of political compromise and centralized decision-making. In the face of economic recession, we propose direct expropriation. In the face of politics-as-usual, we propose autonomy and self-determination. In a world where the future has been stolen from us, we propose to steal it back.