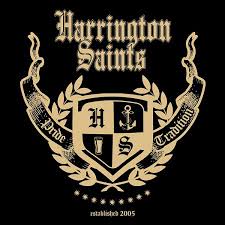 HARRINGTON SAINTS have been around since 2005 and Pride and Tradition is their second full-length album and is produced by Lars Frederiksen from RANCID and he did a great job on it. The production is nice and clear, but gritty enough to keep the edge that this band has. Eleven tracks planted firmly in the vein of Oi and Street Punk that made me want to grab a pint, start jumping around and learn the words to shout along with on this album. You get lyrics about class warfare, getting screwed over by those rich bastards, lots of frustration, and about giving up and just rotting on the couch. This has a lot of touches of classic Oi bands, but still keeps things going without being slavishly bound to their influences. As soon as I put this album on, it just started being on of the better Street Punk and Oi albums that I’ve had the pleasure to listen to in a long time. Such great guitar leads, nice and meaty, rocking bass, the drums just going for broke, the gang vocals that would sound awesome shouted out while driving and the slightly gruff vocals really made this a great album. I now must own all of their music…damn you Californians! This is going into the collection of those that will get played a lot, a whole fucking lot! (Rick Ecker)