MP Johnson is a local punk rock horror writer who just released his first book, THE AFTER-LIFE STORIES OF PORK KNUCKLES MALONE. It’s a story about a farm boy and his pet pig that gets turned into… well… a rotting zombie ham with slime-spewing psychic powers that reeks havoc on those it encounters. It brings to mind Charlotte’s Web… Well if Charlotte’s Web had a sequel called Pig’s Revenge and was directed by Loyd Coffman of TROMA it might look something like THE AFTER-LIFE STORIES OF PORK KNUCKLES MALONE. I first met MP at a punk rock basement show in Wisconsin. At the time he was doing a self published zine called FREAK TENSION. The zine featured short stories about monsters and monster themed reviews of different punk records. He went on to write for RAZORCAKE where he has been a strong supporter of Profane Existence releases and published interviews for PE bands like DRESDEN, WARTORN and IN DEFENCE. He recently stopped by Profane to ask if we’d help distribute his book. Of course we said yes. We also took the opportunity to ask him a few questions for the blog.

PE: What’s The After-Life Story of Pork Knuckles Malone about?

MP: It’s the tale of a boy and his pet slime-spewing, psychic ham. One reviewer called it “The literary equivalent of a Troma movie.” It’s part of the new bizarro fiction literary movement, which is defined as the book version of the cult section of the video store. There aren’t any video stores anymore, but you get the idea.

PE: Why would your book appeal to punks? MP: Generally speaking, if you listen to punk and you read, you need to be reading bizarro fiction. It’s all the things you love about punk in written form: energetic, fast-paced and raw. It’s DIY. It’s weird and fucked up. As for my book specifically, two of the characters are punks. The climax of the book takes place at a show, set in a fictional version of the legendary Green Bay venue the Concert Café. 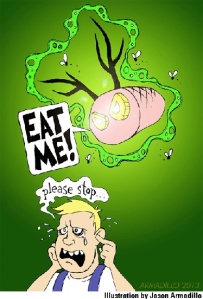 PE: You asked if we’d sell your book in a package with the In Defence – Party Lines & Politics album. Why?

MP: Aside from the fact that they’re one of my favorite bands, there’s also some commonality in terms of subject matter. They draw influence from B-movies. The “Curbside Dentistry” video looks like something Lloyd Kaufman would come up with. Also, I actually helped write the lyrics to “…And Toxic Justice for All”, which is about the Toxic Avenger, so it’s definitely a good match.

PE: How long have you been writing?

MP: I’ve been writing fucked up stories for as long as I’ve been able to hold a pen. I created Freak Tension zine in ’98. Some of the older punks in the Twin Cities still remember it, and I still do new issues occasionally. It was a bunch of reviews, usually me mocking shitty Hopeless Records pop punk bands, and also included messed up stories about zombies and all that good stuff. My short stories have been printed in a bunch of books and magazines, but The After-Life Story of Pork Knuckles Malone is the first book that’s all me. 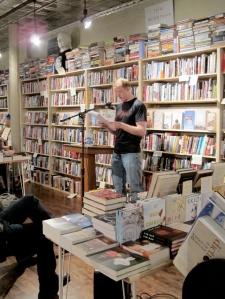 PE: What’s next for you?

MP: I write this crazy shit because I love it. I’ve lucked out and found some publishers that are also into it and people are starting to read my stuff and get psyched about it, which is just the best feeling. My next book is called Dungeons and Drag Queens. It’s coming out from Eraserhead press, which is pretty much the premier publisher of bizarro fiction. That’s coming out this fall. It’s really gory and funny, but it’s a lot different than Pork Knuckles. It’s kind of like Game of Thrones, but with drag queens. You can find out more at www.freaktension.com. 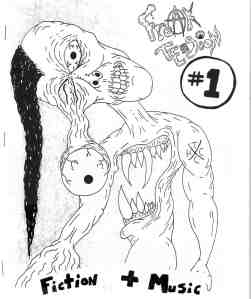