Matt Sidney is an artist from Victoria, B.C. Canada. His drawings are powerful, dark and unsettling. They give the viewer a disturbed, though unspecified gasp of revulsion. We felt that finding out what makes someone that creates such imagery tick was too much to pass up. This interview was conducted by Karl online.

P/E: How/when did you get into drawing? What led you to your specific medium?

Matt: I drew constantly, just for my own satisfaction. I never showed it to anyone. never did a full piece until 2 years ago. No one within the punk scene or my friends knew i did art until i put some drawings up in Copy Curse (artshow/ punk show) and Mark from Six Brew Batha saw it, I’ve known him for a bit, and he asked if i wanted to do something for them. which ended up being their 7″ with Suffering Mind. which got my step in the door. I’ve always liked using pen, its very controllable. I’ve always just liked lines. prefect disgusting lines. Nic Blinko is my biggest inspiration. which is very obvious to those who know his work. Stephen Gammell, his work too.  Any great painters, I always liked looking at their sketches more so, just for the rough sketchy lines. I’ve always liked stuff that was ambiguous and disturbing. Stuff that makes you uncomfortable. Music, art film. So naturally most everything i do is dark looking. I’d like to be able to use it in a more political way. I love what Gord Hill has done with his comics. and other work. And Tomi Ungerer’s political posters in the 70s were so harsh and packed a punch i would love to do something like that. but in a more political context. 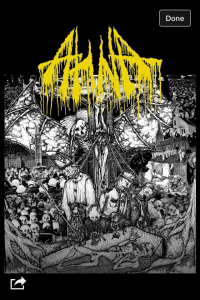 P/E: What do you see as the function or role of visual art in punk? Is it as integral as music?

Matt: It for sure has its part to play. I feel most people appreciate good album artwork, and for me, and I’m sure other artists who listen to punk or just music in general, it solidifies classic albums. Axegrinder’s Rise Of The Serpent Men, Napalm Death Scum, Bolthrower In Battle There Is No Law, Deviated Instinct Rock and Roll Conformity, even Miles Davis Bitches Brew. It’s for sure something that if you are unfamiliar with the band, will grab youre attention. but most certainly not as integral as the music itself. A great album is a great album no matter the cover art. 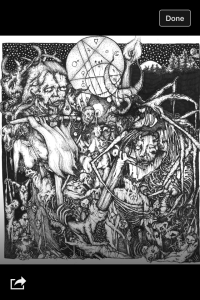 P/E: How long does it take to complete a piece and what do you think technology’s impact has been on art? Kind of a broad question I know.

Matt: It depends on the piece. I do alot of work in a small amount of time. The longest it’s taken was about 24 hours, and spread over a few days, but that was pen and ink and it was much larger then what I usually do. My normal size ink drawings take about 5 hours. On technology, like most everything there are positives and negatives. I personally am not a fan of digital artwork, i just feel it looks so clean and hollow. Though technology also allows me to make several cheap prints for people to have, or to be able to sharpen it up and fix it, to be used for album covers and what not. Technology, yes, is a broad term. For sure destroying the art of film, which has never been an area I’ve wanted to explore but i do appreciate good films. and directors who had to have a team of artists to physically create things. 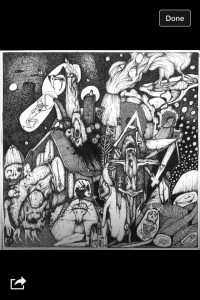 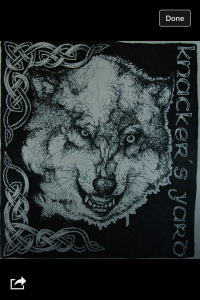 P/E: I guess more specifically I am referring to the position artists are put into in relation to the new album formats ie digital vs physical.

Matt: Yeah not a fan of digital. I myself would never use a computer to create art. 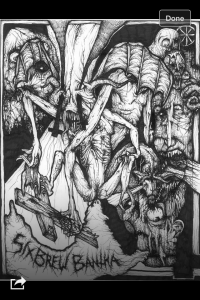 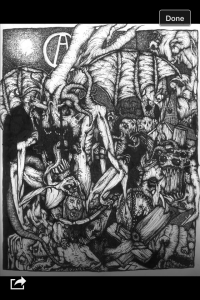 P/E: But the growing obsolescence of material physical albums and the growing dominance of iTunes and the like, where will an artist fit in?

Matt: Mostly the punk scene. Almost everyone puts out physical copies. Either a tape or 7″ or a 12″. I prefer a physical copy without a doubt. Like i know for my band, we are going to put out a demo just online for free, and once we get material we are comfortable with we will release a physical copy.

P/E: So what is next for Matt Sidney?

Matt: Not entirely sure. I’m thinking about starting a new house with some people. Hopefully to be used as a political/ venue/ arts collective.

P/E: Where can you be contacted?